A series of projections on the side of Sir Thomas Tresham's Catholic folly, Triangular Lodge. The building was officially used a s a warreners Lodge but was really an expression of Sir Thomas' belief in Catholicism.


These projections will be activated by different sensors so that Sir Thomas appears to do different things in response to the public's movement. The projection is planned for the the section of building below the lintel on the right hand side. The rest of the building will be illuminated internally and externally. 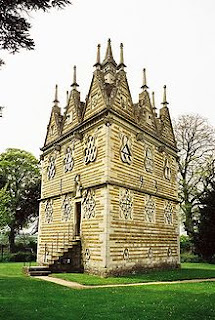