Another photograph from Wednesday nights laser testing on Borough Hill, the location of the final BBC World Service transmission from this site in Daventry. The transmissions were always started with the phrase 'Daventry Calling'. 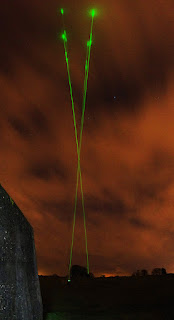 This piece is part of the Cargoes Cultural Olympiad project and also supported by Northamptonshire County Council (Graham Callister) and Daventry District Council. Thank you.


Photograph by Steve Woods.
Posted by jo fairfax at 16:28 No comments:

Another image from one of the band of photographers following and chronicling the project. This is by Keith Park. Thank you. 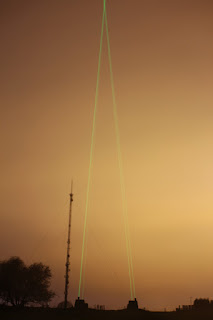 Just received another image from Ian Brock from Wednesday evenings laser transmitter trial. The intense areas of light are low scudding clouds moving across the beams. 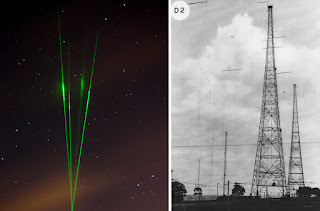 Last night saw the first laser test for the new Cargoes project. This took place on Borough Hill, Daventry, where the final BBC World Service transmission on this site took place 20 years ago. The exposed hill is full of concrete transmitter plinths. We sited one 7.8w laser on each of the four major plinths to create a large light pyramid/transmitter form.


Thanks to the Cargoes team for making this project happen and Chrys Allen for preparing her nocturnal 'art' walk on May 7th 9pm start. Thanks to Graham Callister, Dal Badial, Darren and the team of photographers following these laser interventions - Ian Brock, Keith Park, Steve Wood and Andrew Randall.


This image taken by Ian Brock is the first to emerge. Thanks. 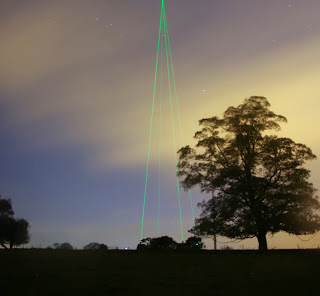 A photograph supplied by Daventry Museum of the original transmitter masts 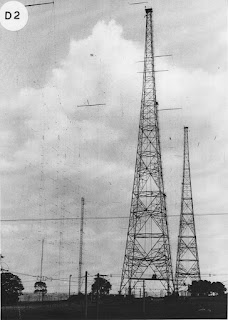 We made our second laser test last night. Dal used a stronger laser (40w) and we finally reduced the number of beams to two. We also illuminated one side of the curved facade with a slow colour changing wash.


Several terrific photographic enthusiasts are now following the project and some images are emerging from last nights tests. These pictures were taken by Andrew Randall.


Thanks again to Graham Callister for making this event to date happen, to the laser men Dal Badial and Darren, to Kevin Loach who worked on the led washes and Ed at the Lift Tower. 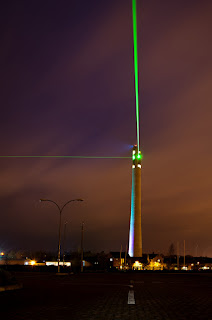 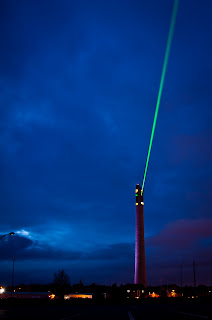 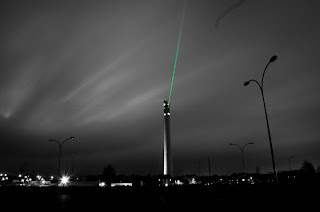 I am extremely moved by local resident Nikki Gibson's emailed response to the FLOW website.
We saw your lights the other day and happily stood watching for five minutes. Then tonight (19th April) we saw the beautiful spectacle repeated only to a greater extent. My husband and I not only dropped everything to watch but turned out every light in the house to get a better view. Unsatisfied with this we togged up our 21 month old daughter (who repeatedly said "Wow! Outside! Wow!" and went outside to simply stand and watch. We have had a very rough time of it over the past few weeks with family illnesses and threatened heartbreak which we have yet to fully resolve, but watching your display was reminiscent of watching a lighthouse guiding us through. It took our breath away and for the first time in weeks the silence was not filled with thoughts of what to say to make each other feel better or feelings of impending doom, but with just a very pure and simple feeling of wonder. I feel that for the first time in ages I appreciated something on the same level as a toddler where I didn't have to think too much - just to stand, to look, and to think "wow" was an amazing feeling. Thank you.
P.s. to think that one of the most landlocked towns in the country had a lighthouse tonight is quite entertaining, too!
Posted by jo fairfax at 15:14 1 comment: 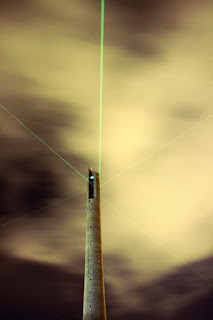 The laser team re-united last night to create a trial on the magnificent Northampton Lift Tower (named The Lighthouse) building on the outskirts of Northampton.
Thanks again to Graham Callister for making this happen. To Dal Badial for orchestrating the lasers and Andrew Hilton for the photographs
Posted by jo fairfax at 17:46 1 comment: